Family law: what is a fact-finding hearing? 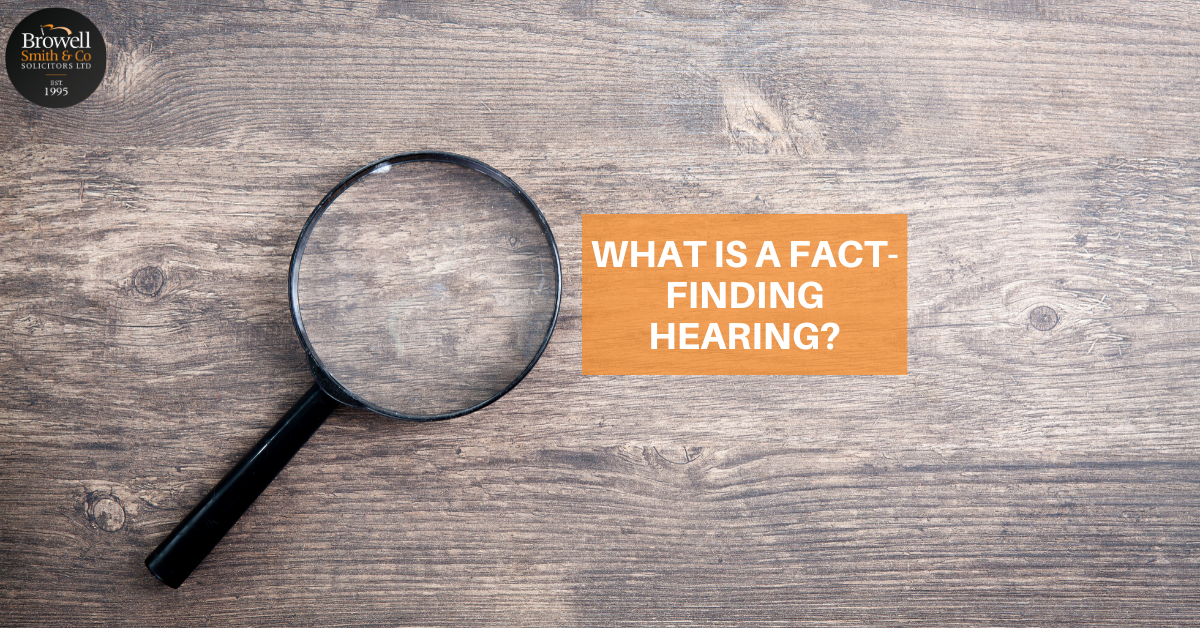 At Browell Smith & Co we are receiving growing numbers of requests for legal advice as part of fact-finding hearings, though people are unfamiliar with what’s involved and unsure what they need to do.

What is a fact-finding hearing?

A fact-finding hearing, as its name suggests, is a court hearing used as part of family law proceedings. They are used when facts are in dispute between the two parties, such as when allegations are made about one or both partners which require the intervention of a judge to establish what has actually happened.

The value of a fact-finding hearing is that it establishes the facts before the case moves on to the final hearing. This means less time is wasted on unnecessary detail at later hearings.

In simple terms, the fact-finding process is as follows:

When are fact-finding hearings used?

As above, fact-finding hearings are used when facts are disputed, to establish what has actually happened. They are useful to cut through the strong emotions that can run through family law cases and can help to avoid a “he-said, she-said” scenario by establishing a factual, legally-binding base for the future.

Fact-Finding hearings are most commonly used within Child Arrangement Proceedings where there is a dispute about where a child(ren) should live and/or what contact they should have with the parent with whom they do not live.

This can include allegations about behaviour while a couple were together, or about long-standing issues that became relevant since the separation, such as if they have an issue with drink or drugs. Frequently, the allegations centre on abusive behaviour, either through physical violence, emotional abuse or psychologically abuse such as intimidating and threatening behaviour and coercive control.

It’s worth noting that a court will only carry out a fact-finding hearing if it is absolutely required. If one person accepts a large proportion of the allegations being made, then the court may decide no hearing is required. Likewise, if the allegations would make little difference to the outcome of the case, even if they were proved to be true, then it is unlikely to proceed with a fact-finding hearing.

Why do I need legal advice for a fact-finding hearing?

It is important to have legal advice at every stage of the fact-finding process. Courts are trying to reduce the amount of time spent examining and listening to evidence, and so are often treating the statements given as evidence-in-chief.

If you have made an error of any sort whilst preparing your Scott Schedule or your statements, it could have a damaging effect on your case.

We strongly recommend that anybody involved in a fact-finding hearing seeks legal advice from an experienced and specialist family law solicitor from the very beginning. The Scott Schedule and the statements will count as evidence at the hearing and should NOT be completed without expert help.

You can find out more about services from Browell Smith & Co’s family law team here.

Contact our expert team today to arrange a no-obligation chat at any of our offices, in Newcastle, Cramlington, Ashington and Sunderland, or alternatively telephone our team directly on  0191 691 3418 to discuss your particular requirements.

Speak to a Specialist

Enter your details below and we will call you back...